Please sign our petition to complete the line from Oxford to Cambridge - click on the button below.

If you have registered previously and your personal details have changed then please email oxcam@railfuture.org.uk with with your name and details to be updated. In future we will be providing a 'self-care' facilit to amend these details on the website.

In a boost to East West Rail, the DfT announced on 18 March 2021 that it had abandoned the Oxford–Cambridge Expressway in favour of more targeted road interventions. Subsequently, on 31 March 2021, the EWR Company launched a wide-ranging second non-statutory consultation.

The consultation had six key areas of focus:

Full details can be viewed at www.eastwestrail.co.uk.

The closing date for the consultation was 9 June 2021.

The massive financial impact to the UK's economy caused by the COVID-19 pandemic may have caused alarm to many wanting to see progress on the reopening of East West Rail. Would it be descoped, deferred, or even cancelled, despite contractors on-site for the reopening of the 'Western Section' between Bicester and Bletchley?

Funding was first announced by the government in 2012, and Network Rail had obtained its Transport and Works Order in January 2020, so all work could go ahead. The DfT announced on 25 January 2021 that the Treasury had confirmed £760m for the East West Rail 'Western Section' but only the infrastructure to support services between Oxford and Bletchley/Milton Keynes (not upgrading the route to Bedford, nor the link to Aylesbury) as the rest will be "phased". Moreover, the start of services has been pushed back by a year to 2025.

The government made a big fuss of the funding (announced together with £34m for the Northumberland line) but is the announcement new money?

Apparently so, as the Treasury has only just signed it off, although work to reinstate the Western Section is well in hand, especially the flyover next at Bletchley station, so some funding had to be provided regardless. However, slipping the target date and phasing allows the government to spend money more slowly, and the line will not be electrified, although this may happen eventually. In fact, because of the pandemic the Treasury is only providing money one year at a time, rather than for multiple years

Meanwhile, the EWR Consortium of local authorities "will continue to press the Government for an early decision on the investment that will allow the Bletchley - Bedford and Milton Keynes - Aylesbury sections to be delivered as soon as possible." However, the key point is that, despite the fall in passenger numbers, the Government is continuing to invest in rail whereas, other than the Black Cat (A421/A1) to Caxton Gibbet (A428) scheme, the Ox-Cam Expressway is on hold.

On 27 July 2020 the East West Rail Consortium announced that it has commissioned consultants Steer to develop a business case for the Eastern Section (Cambridge to Ipswich/Norwich) of the East West Rail mainline. The results will be used to demonstrate to the Department for Transport the economic benefit of improving the frequency of passenger rail services on the Eastern Section, which currently has hourly trains, and providing a new direct passenger rail link from Suffolk/Norfolk to Oxford.

East West Railway's "Preferred Route" report published in January 2020 explained that one of the reasons the route (via a route south of St Neots and close to Cambourne - see image below) was chosen is the potential for alignment with the new A428 road for both environmental and cost reasons. That advantage was emphasised by people and organisations who responded to the consultation. The EWR report also refers to the National Infrastructure Commission's requirement for a 'multi-modal corridor...combining EWR and the proposed new A428 dual carriageway'.

Unfortunately no one seems to have told Highways England about EWR's preferred route. The design of the new A428 from Cambourne to Roxton near St Neots currently has no allowance for the future railway. The second stage of consultation on the new route presented a huge amount of detail on environmental advantages but there is was mention in the documents of co-location with EWR, which would be the largest environmental (and overall) cost saving of all. 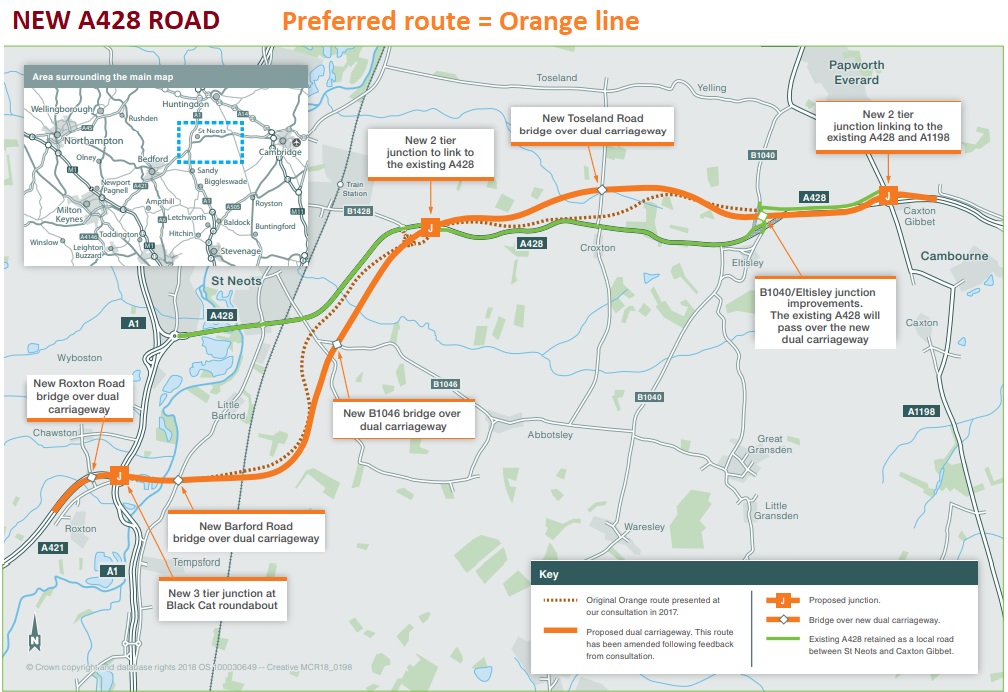 The A428 consultation documents are available here: https://highwaysengland.citizenspace.com/cip/a428-black-cat-to-caxton-gibbet-supp-con-2020/.

The closing date for comments was set at midnight on 28 July 2020. As this is the second consultation, Highways England were unlikely to accept comments about making major changes such as allowing for the railway. Other players that could have made a difference are MPs, the Cambridgeshire and Peterborough Combined Authority (CPCA), and the National Infrastructure Commission (NIC).

Published on 29/01/2020, written by Jerry Alderson and John Henderson

On 29 January 2020 the government officially approved Network Rail's (NR) plans for the Bicester to Bedford section of EWR. This is the long-awaited result of the public inquiry and subsequent Inspector's Report that started almost a year earlier. As a result construction works are progressing at a pace, with the intended opening date in 2024 (note: subsequently announced in January 2021 that it would be 2025).

During the 12 months since its application, NR have been making what progress they can without a TWAO. But now they can complete the detailed engineering and hire construction companies.

The major work performed so far, and the most visible to the public, has been the reconstruction of parts of the concrete flyover at Bletchey. Built in the early 1960s, it has suffered from so-called 'concrete cancer' and a significant proportion of the segments are having to be replaced.

The Transport & Works Act Order (TWAO) issued by the government approves the project almost completely in accordance with NR's application. In other words, NR has got everything it asked for. It means that most of the objections were overruled.

Here are the issues that raised most of the objections with the outcome now confirmed as follows:

The main, specific planning conditions are:

Recent news: East West Railway Company announces its decision on the route from Bedford to Cambridge

On Thursday 30 January 2020 it was announced by the East West Railway Company that the railway between Bedford and Oxford would, if its preferred route is given permission to proceed, would be on a new alignment via St Neots and Cambourne, calling at the new Cambridge South station (due to open between 2025 and 2027) and Cambridge station. This is 'Route E', which was backed by 80% of responses to the public consultation in 2019. South Cambridgeshire councillors campaigned hard for it as well.

For Railfuture's view, please read an article on the Railfuture website.

See map, for details of the (preferred) route, which is not an actual alignment. One should not forget that there is still much detailed design work ahead before this project obtains a Development Consent Order. There will doubtless be plenty of opportunity to comment on details as they emerge for consultation. But for now, Railfuture welcomes this as a major step towards realising our vision.

The East West Rail Company, which the Secretary of State for Transport, Chris Grayling, designated in late 2016 as the body to oversee the opening of a rail route between Bedford and Cambridge, was formally launched by Mr Grayling on 14 December 2017 when he also visited Bletchley Station and Bletchley Viaduct. The company has been working towards deciding on the route of the railway, which is likely to go close to Sandy (although Railfuture believes a route further north at St Neots has considerable merit (see report [see pages 6 and 8] to Cambridegshire County coucillors in 2013). However, it is important that pressure is kept on the government and politicians to ensure that the best possible railway is built and in a reasonable timescale. An opening date around 2028 could be possible if there is the political will.

Railfuture wants to see the new line electrified from day one. There is no cheaper way of doing it than as part of the initial construction. However, because of delayed and over-budget delivery of recent electrification schemes the government is not currently in favour of more electrification. This is something that must change and Railfuture continues to campaign on this, especially to ensure that the skills built up over decades that Britain lost in the early 1990s and had to expensively re-learn recently will not be lost a second time. Railfuture hopes that the completion of electrification of the TransPenine Route Upgrade, which Mr Grayling confirmed in July 2018 will take place, could see the teams transfer onto East West Rail.

The Department for Transport has agreed with Network Rail that the new Cambridge South station (which would serve Addenbrooke's Hospital and the biometric campus) will be opened as a four-platform station, although it has dropped its itention to double the railway from two to four tracks between Cambridge station and Shrepreth Branch Junction (where the Liverpool Street and King's Cross lines diverge) ultimately allowing capacity for six trains per hour between Bedford and Cambridge.

Railfuture is eager for services to the east of Cambridge to be planned from day one so that there will be direct services through Cambridge to Ipswich and Norwich. The Ox-Cam link will deliver substantial cross-region benefits.

Over the last few years there has been increasingly good news about the East West Rail Link, although the full scheme will not be realised until at least late 2020s. Click [News Archive] to read Oxford-Cambridge news stories from 2010. These include:

We should not forget the enormous political progress for the East West Rail Link in recent years:

What YOU can do

Help us continue to Cambridge by contacting your MP. You can send our 'postcard' (PDF 34kB) to them. Spread the message and get as many other people as possible to do like-wise. You could either send them an email with the address of this web page, or print the leaflet (below) and postcard and give it to your friends. Many thanks.

What Railfuture has been doing

Railfuture held its national conference in Oxford on 2nd November 2013, which included a presentation about the Ox-Cam link from Patrick O'Sullivan of the East West Rail Consortium.

Railfuture also held a conference in Cambridge on 22nd June 2014, when nearly all of the speakers (including two representatives from Cambridgeshire County Council, which is leading on the Cambridge-Bedford section) mentioned the Ox-Cam link in their presentations. This clearly shows how important the rail link.

On 21st May 2016 Railfuture held its national AGM in Milton Keynes. The main speaker was Iain Stewart, MP for Milton Keynes South, who talked about East West Rail and how vital it is. There was also a presentation about the Borders Railway that reopened in September 2015, which serves a much lower population. It took only five years from final approval to opening to the public.