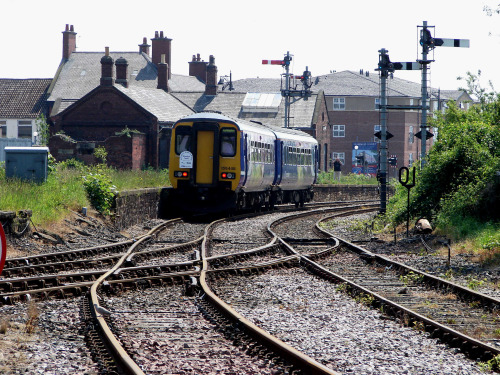 Railfuture welcomes the government's January announcement of funding for Reversing Beeching, and bid guidance, but £500m will only be enough to reopen about 25 miles of railway at typical Network Rail costs. Therefore this funding should be used at least in part as seed capital to prove the viability of potential schemes and draw in more funding from elsewhere, so that a pipeline of projects can be established. To utilise that funding efficiently, a streamlined approval and implementation process is required, not constrained by current Network Rail procedures. Our prime recommendations for missing links to be reopened include: Ashington, Blyth and Tyne, Wisbech, Skelmersdale, Cowley, St. Andrews, Uckfield – Lewes, and Skipton – Colne. Funding for Hoo, Levenmouth and East-West Rail had been announced previously.
SENRUG Charter 2008 at Bedlington on the Ashington Blyth and Tyne route. Photo by John Brierley.
The further round of funding for new stations is also welcome, but the government must also make progress on market-led proposals, especially Southern Rail Access to Heathrow.

Railfuture campaigns for railway lines to be opened or reopened, in alliance with other groups throughout Britain, have been a success. Over the past half-century more than 500 miles of route have been added to the network, gaining tremendous popular support. Clearly there is no prospect of reopening all the lines closed by British Railways, but in some places - where the economic factors that brought about their closure have changed - there is a need for new or reopened lines to meet the increasing demand for rail transport. Our new guide Expanding the Railways, which can be viewed or downloaded, will help stakeholders and campaigners navigate the process of gaining agreement to a new railway.

Railfuture focuses on schemes which we believe will most support economic growth, and therefore offer the greatest chance of success. Earlier guidance was published in June 2009 by the former Association of Train Operating Companies in "Connecting Communities".

Alternative routes between major centres are needed to create additional capacity and resilience in the strategic network. The risk of single points of failure in the rail network has been cruelly exposed by the recent damage to the sea wall at Dawlish, which cut off south west England from the rail network for two months.

Oxford - Cambridge The first phase of East West Rail was approved on 16 July 2012 and a Joint Delivery Board was formed. Oxford and Aylesbury to Bletchley and Bedford will be reinstated. On 8 January 2013 Network Rail's Strategic Business Plan for 2014-19 confirmed their plans for the western section. Passenger services started running between London Marylebone and Oxford Parkway via Bicester Village as part of Chiltern Railway's Evergreen 3 project from 25 October 2015, and were extended to Oxford on 12 December 2016. Services between Oxford / Aylesbury - Bletchley - Bedford / Milton Keynes are planned to start by the early-2020s. While you're waiting, enjoy Let's go to London. This is a fantastic result for Railfuture - we are continuing to campaign to complete the project to Cambridge. A walk from Bedford to Sandy took place on 29 June 2013 to highlight the next phase. In October 2018 the proposed East-West Expressway was put under the spotlight.

Uckfield - Lewes Railfuture is campaigning to support economic growth in East Sussex and Kent and reconnect communities by linking Uckfield and Lewes by rail. This could support sustainable housing growth to help meet Brighton's unmet housing needs. It would promote economic growth in East Sussex by providing access between the Weald and employment opportunities in Brighton, help regenerate Newhaven, create additional peak capacity between the South Coast and London to relieve the Brighton Main Line, and help maintain Brighton's visitor economy by providing an alternative, diversionary route between the Sussex coast and London.
Finally, HS2 will provide a step change in capacity to relieve the West Coast Main Line.

As our cities grow, so there is a need for more capacity in their metro networks.

Bristol MetroWest Railfuture supports MetroWest proposals for more frequent services, reopened stations, reinstatement of the Portishead branch and quadruple track between Bristol Temple Meads and Filton, which will attract commuters out of their cars and ease congestion around Bristol. We are pressing neighbouring local authorities (Gloucestershire, Somerset and Wiltshire) to become more involved so that their rail aspirations are integrated with those of the West of England Partnership.

Growing towns which are isolated from the rail network can be hit particularly hard in an economic downturn; reinstating a rail link can promote economic recovery, and when the population is 20,000 or more a good business case can be made. Read Reconnecting left-behind towns.

March - Wisbech The catalyst for launching our campaign was the commitment of Cambridgeshire County Council in the Local Transport Plan to fund and carry out a business-case study for the reconnection. We organised an online and paper petition, attracting a huge response with 3784 signatures, to show the County Council evidence of support from local members of the public for the reconnection and thus encourage it to pursue the project through to its logical conclusion. The results of the County Council commissioned Stage 1 study have already been published and these show the line could be operated at a profit. A Stage 2 study has therefore been commissioned which will assess the capital costs. There have been positive statements of intent from within the splendid Wisbech 2020 Vision manifesto and from the Wisbech Member of Parliament Steve Barclay, who organised a Rail Summit of key stakeholders. At the rail summit Stephen Hammond, the Rail Minister, described the reopening as a strategic priority. The campaign is specifically targeted at people in the local area who will directly benefit from the scheme. At 31,000 people in the built up area of greater Wisbech, this is one of the largest towns in the UK without a railway station - and the tracks of the 'mothballed' railway run right into the town! Also view or download our original March-Wisbech proposals, and for further developments and information check the campaign website. 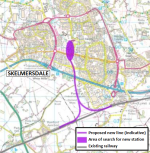 Kirkby - Skelmersdale. In December 2012 a Merseytravel report proposed that an infrastructure study be undertaken by Network Rail in conjunction with local councils to define the scope of the project. The West Lancashire Master Plan (page 29) includes linking Skelmersdale to the rail network with a new rail station and bus interchange in the town centre. Services to Kirkby from Liverpool would be extended to Skelmersdale, and services from Wigan to Kirkby would be diverted to Skelmersdale, where a park and ride facility would also be established. The development is in the package of twelve rail priorities which make up the Liverpool City Region Long Term Rail Strategy published by Merseytravel in 2014. On 1st June 2015 Lancashire County Council approved £1m funding towards the GRIP3 evaluation, whilst in April 2016 it was reported that Lancashire County Council will invest £4.7m into the project over the next two years. On 18 September 2017 Merseytravel confirmed that it will be contributing up to £765,000, adding to £4.32m already set aside by Lancashire County Council to further build the case for both a new station at Headbolt Lane in Knowsley, and for a new railway branch line from Rainford to Skelmersdale town centre. Merseytravel electric services will be extended beyond Kirkby to Skelmersdale, where they will connect with Northern services from Wigan diverted from Kirkby.

Ashington Blyth and Tyne Railfuture supports the SENRUG campaign to re-introduce passenger services on part of the Ashington Blyth and Tyne freight network, which will bring around 100,000 people in an area of high unemployment and poor transport links within reach of jobs and education in Newcastle. The business case is supported by robust Market Appraisal, Demand Assessment reports and a GRIP2 Feasibility Study commissioned by Northumberland County Council. On 11th October 2016 Northumberland County Council agreed to proceed to GRIP 3, setting out an ambitious timescale and saying trains could be running by early 2021. In February 2019 there were encouraging words from Transport Secretary Chris Grayling during a visit. In September 2019 the County Council ran a public consultation on 'The Northumberland line'. Photo by John Brierley.

Levenmouth The Levenmouth Rail Campaign seeks to restore rail services to the disused line between Thornton and Levenmouth, a conurbation with a population of 38,000 and a high level of deprivation, to provide access to job, training and leisure opportunities in Edinburgh and South Fife. On 8 August 2019 Michael Matheson, the Scottish Transport Secretary, announced the green light and £75m to reopen the route to passenger services.

St. Andrews in Fife has a resident population of 17,000 but is now six miles from the nearest railway station at Leuchars since its own station and connecting line closed in 1969. It is home to the University of St. Andrews, as well as being synonymous with golf. Two grants from Transport Scotland's Local Rail Development Fund, first in August 2018 and again, after the Fund was re-launched in February 2019, in August 2019 have enabled detailed appraisal work to progress, 50 years after the town lost its rail service.

Hythe in the Hampshire District of New Forest has a population of around 20,000, and thousands of new homes are planned for the Waterside area. These communities are currently dependent on heavily congested roads whilst the ferry service between Hythe and Southampton Port has been threatened with closure as passenger numbers have declined due to its unreliability. A rail service between Hythe and Southampton, via Totton, on the existing freight branch would offer a much shorter journey time to the city centre than either the bus or the ferry. In early-2020 Hampshire County Council submitted a bid to the DfT's Restoring Your Railway Fund.
Enjoy the view from the cab in May 2017, on The Fawley Forester from Southampton Central to Fawley Esso via Totton.

Bere Alston - Tavistock. This is an example of a local authority - Devon County Council - taking the initiative, with the support of the local population, to reopen a railway line to meet a local transport need. Devon County Council has worked with Kilbride to raise funding from developers of new housing at Tavistock, and is progressing the business case and technical investigation of structures on the route for GRIP stages 2 and 3. On 9th July 2014 the council agreed to progress the detailed design and in August 2014 approved outline planning permission for the 750 home development which will fund the rail link.

Often reinstating or creating a new chord can create opportunities for new services which meet a latent transport demand.

There are also opportunities for greater use and integration of preserved lines as public transport.

Transport schemes take a long time to develop. Rail reopenings, like most rail projects, have to go through Network Rail's GRIP process, the Governance for Railway Investment Projects. This is a long slow process, and without protection these linear assets are easily destroyed by redevelopment. Therefore Railfuture consider that planning authorities should protect potentially valuable routes for which a business case has not yet been established. Characteristics which justify protection for a closed route include the following:
The South Derbyshire Local Plan sets a good example by protecting sites for potential stations at Castle Gresley, Drakelow and Stenson Fields on the Leicester - Burton freight route.

Railfuture campaigns have helped to put 500 miles of route (and over 400 stations) on the map in the last 50 years. Schemes in progress include:
Computer-generated fly-through of the extension from New Street to Centenary Square due to open in 2019:

The further extension to Edgbaston is due to open in 2021.